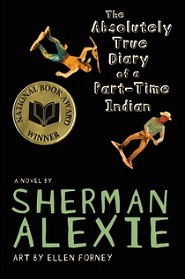 “The school board’s decision to seek an alternative book to convey ‘the cultural messages’ of Alexie’s work came after complaints from parents that the book contained sexually charged material inappropriate for their children, was peppered with pejorative terms for women, people of various races and those with learning disabilities and mocked Christian beliefs…Gretchen Caserotti, director of public libraries in Meridian, spoke in favor of not placing restrictions on that or other books during a recent public meeting about the Alexie novel.”