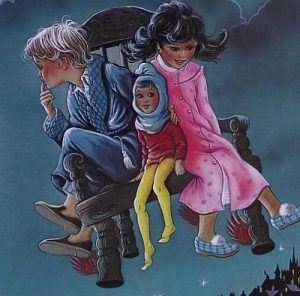 I grew up jealous of white children.

Though hardly fluent in English herself, my mother had tried very hard to read me English fairy tales when I was young. As a child, I was familiar with Anderson, Grimm and many stories written by Enid Blyton. I remember thinking then, questions like: Where was my snow? Why aren’t there fairies living in our garden? What does a Christmas pie taste like? And especially hated it whenever my mother would say, “We don’t have any of those things here, my dear; they are all in English places overseas.”

Last year, I had tried to recapture that feeling in a poem I wrote for a poetry class at Manhattanville College inspired by Enid Blyton’s famous series The Wishing-Chair: Dear Wishing Chair,
please fly me out of Malaysia–
the most boring place on Earth.

Won’t you take me on an adventure
to magical places,
where there are elves, and pixies
and toadstool fairies.
where children are read bedtime stories,
where there is snow on Christmas Day,
where the weather changes four times a year–
and not stay the same all through the year.
Boring, boring, boring!

Dear Wishing Chair,
please fly me out of Malaysia–
and take me to places,
like England and America.

Even as a child, I knew the children in the books I read were different from me and everyone around me. To me, these stories probably read more like high fantasy – the characters lived in a world that resembled next to nothing in mine! So consumed was I with this desire to live their lives, that I don’t remember ever wanting to read something with a main character of my own skin color. To my parents and many around me, I lived in my own world – a world inhabited by people with very fair skin.

Enid Blyton influenced my earliest writing, and I finished writing my first book the year I turned 17; it was a story of 71,000 words set in New York City – a place I’ve only ever read about. Understandably, the manuscript has stayed hidden in my drawer ever since its completion.

The major turning point in my writing came 2 years ago during my study under Prof. Phyllis Shalant at the Manhattanville College. The class was encouraged to draw inspiration from our own culture and heritage, which was when I realized exactly how much I have been taking mine for granted; why, we have fox demons, dragons, monkey gods and most of all, kung fu!! *yelled with the same vigor as Po the Dragon Warrior* If I could fall in love with fairies and elves and wishing chairs, other children could very well fall in love with the wonders of Asian stories, too. And from that moment, I truly wanted to become one of those who could bring magic like that to children.

Although, admittedly, I still dream of publishing a book with a white protagonist, my main goal in my writing is to give young readers this gift that I had received from authors like Enid Blyton and Roald Dahl long ago– the awareness of many exciting worlds that exist beyond where we live– this awareness that had led me on all the amazing adventures away from home that I never would’ve had if I had never been an extremely jealous child.

A Chinese born and raised in Malaysia, Celeste is currently a graduate student completing her MFA in Creative Writing at The New School and Manhattanville College. Celeste writes mainly middle-grade and young adult fiction and is represented by Rosemary Stimola of Stimola Literary Studio.