Phyllis Krasilovsky Has Passed On 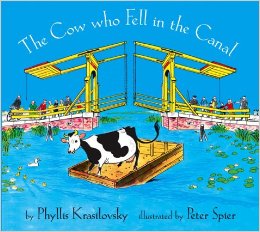 “One of her most popular titles, The Cow Who Fell into the Canal (Doubleday, 1957) almost wasn’t published, according to Peter Spier, who illustrated the book. Spier described meeting with Peggy Lesser, then an editor at Doubleday, to discuss Spier’s first picture book. On Lesser’s desk was a manuscript entitled Anarina, the Dutch Cow, by Krasilovsky, which the editor had already rejected. Spier, who was Dutch, persuaded Lesser to let him take a look at the manuscript. He renamed the cow ‘Hendrika,’ gave the book its current title, and set the story in Broek, Holland, incorporating many familiar names and places from his childhood. After publication, the book was translated into many languages and is still very popular in the Netherlands, according to Spier.”