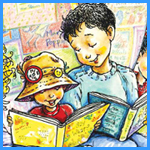 New York, NY — February 27, 2014 – The Children’s Book Council and Every Child a Reader have unveiled Robin Preiss Glasser’s official 2014 Children’s Book Week poster at bookweekonline.com, commemorating the 95th annual celebration of books for young people and the joy of reading. 175,000 copies will be distributed nationwide, and may be requested online at no cost beyond shipping. 2014 will be the largest celebration of Children’s Book Week yet, with official events – which give kids the opportunity to connect with their favorite authors and illustrators in person – in all 50 states for the first time in the initiative’s history.

Robin Preiss Glasser is the 2013 Children’s Choice Illustrator of the Year Award-winner for Fancy Nancy and the Mermaid Ballet, part of the Fancy Nancy series which has more than 50 titles and has been on the New York Times Bestsellers list for more than 350 weeks. Her poster shows a group of children of all ages reading together on a chair quilted with the covers of classic children’s books including Eloise, Goodnight Moon, The Twits, The Purple Crayon, Call of the Wild, Charlotte’s Web, and other favorites.

“To be a part of Children’s Book Week, with its recognition of the joy of storytelling and importance of reading, is truly an honor,” says Robin Preiss Glasser. “In creating the poster for this year’s celebration, I follow in the footsteps of so many great children’s book illustrators, many of whose work enchanted me as a child. It is thrilling to have the opportunity to share my art with the libraries, schools, and book stores that are part of the Children’s Book Council’s and Every Child a Reader’s outreach, as together we share our love of storybooks with young audiences.”

Robin Preiss Glasser is the #1 New York Times bestselling illustrator of the Fancy Nancy series, written by Jane O’Connor; America: A Patriotic Primer, A is for Abigail, and Our Fifty States by Lynne Cheney, and Tea for Ruby by Sarah Ferguson, the Duchess of York. She lives in Southern California with her family, puppy, and tiara collection. Learn more at robinpreissglasser.com.

About the Fancy Nancy Series

With more than 24 million books sold since the series launched in December 2005 and more than 350 weeks on the New York Times bestseller list, the Fancy Nancy franchise shows no sign of slowing down.  Jane O’Connor and Robin Preiss Glasser have appeared on The Today Show, The Martha Stewart Show and on TLC’s Mall Cops and have been featured in over 100 daily newspapers.  The Fancy Nancy series has been translated into 18 languages and has over 30 licensees to date.  In 2008, Fancy Nancy was named the Book Character of the Year by Global License. Fancy Nancy also received two nominations for the Toy Industry Association’s Toy of the Year Awards, two nominations for the 2009 LIMA International Licensing Excellence Awards and was named the Best Character Brand Program of the Year.

Established in 1919, CBW is the longest-running national literacy initiative in the country. Each year, official and local commemorative events are held nationwide at schools, libraries, bookstores, homes  — wherever young readers and books connect. In 2014, official events will be held in all 50 states for the first time in the initiative’s history. Learn more at bookweekonline.com.

About Every Child a Reader (ECAR)

Every Child a Reader is a 501(c)(3) literacy organization dedicated to instilling a lifelong love of reading in children. Every Child a Reader creates and supports programs that: strive to make the reading and enjoyment of children’s books an essential part of America’s educational and social aims; enhance public perception of the importance of reading. ECAR’s national programs include Children’s Book Week, a nationwide celebration of books and reading, and  the longest-running national literacy initiative in the country; the Children’s Choice Book Awards, the only national book awards program where the winning titles are selected by kids and teens of all ages; and the National Ambassador for Young People’s Literature Program, the country’s “Children’s Literature Laureate”. Please visit ecarfoundation.org for more information.

The Children’s Book Council is the national nonprofit trade association for children’s book publishers, and the anchor sponsor of Children’s Book Week. The CBC offers children’s publishers the opportunity to work together on issues of importance to the industry at large, including educational programming, literacy advocacy, and collaborations with other national organizations. Membership in the CBC is open to U.S. publishers of children’s trade books, as well as in some cases to industry-affiliated companies. The CBC is proud to partner with other national organizations on co-sponsored reading lists, educational programming, and literacy initiatives. Please visit cbcbooks.org for more information.