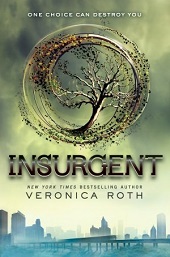 Akiva Goldsman, an Academy Award-winning screenwriter, will pen the script. The Insurgent movie is scheduled to come out on March 20, 2015. The final film, Allegiant, will follow about one year later on March 18, 2016.

2013 proved to be a very successful year for young adult novelist Veronica Roth. Not only did HarperCollins publish the conclusion title of the Divergent trilogy, but all three books made it to USA Today‘s list of “100 Bestselling Books of 2013.”