New National Ambassador for Young People’s Literature to Be Announced on January 2, 2014 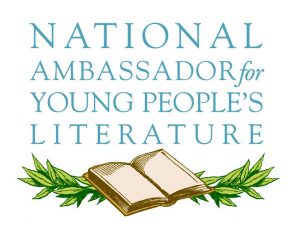 Librarian of Congress James H. Billington will announce the next National Ambassador for Young People’s Literature on January 2, 2014. The post was created in 2008 by the Center for the Book in the Library of Congress, the Children’s Book Council (CBC) and Every Child a Reader to raise national awareness of the importance of young people’s literature as it relates to literacy, education, and the development and betterment of children’s lives. Appointed for a two-year term, the National Ambassador will choose a platform that reflects his or her personal interests (also to be revealed on the announcement date) and advocate this policy throughout his or her travels and tenure.

The National Ambassador for Young People’s Literature is named by the Librarian of Congress based on recommendations from a selection committee representing many segments of the book community. The selection criteria include the candidate’s contribution to young people’s literature and ability to relate to children. The members of this year’s selection committee were:

The Center for the Book in the Library of Congress was established in 1977 to use the resources of the Library of Congress to stimulate public interest in books and reading. With public and private sector support, the center carries out its mission through a national network of affiliates in all 50 states, the District of Columbia, and the U.S. Virgin Islands, and in cooperation with more than 80 national reading promotion partners such as the Children’s Book Council. The center plays a key role in the Library of Congress’s National Book Festival, held each year on the National Mall in Washington, D.C. For more information about the center, go to www.read.gov/cfb/.

For more information about the National Ambassador for Young People’s Literature, go to www.ChildrensBookAmbassador.com.