S&S Books for Young Readers to Publish What Does the Fox Say? by Viral Video Sensation Ylvis in December 2013 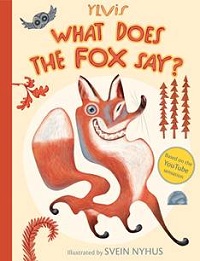 NEW YORK—Simon & Schuster Books for Young Readers, an imprint of Simon & Schuster Children’s Publishing, announced today plans to publish What Does the Fox Say?, a cheerful and quirky picture book written by the comedy duo Ylvis. The song the book is based on, “The Fox,” was released as a three-minute video on YouTube and quickly garnered over 200 million views since its debut in September 2013. Simon & Schuster has announced a first printing of 250,000 copies and acquired North American rights. The deal was brokered by Creative Artists Agency and was acquired by Jon Anderson, President and Publisher of Simon & Schuster Children’s Publishing. The book will be edited by Christian Trimmer, Senior Editor at Simon & Schuster Books for Young Readers, and will be published on December 10, 2013.

“I cannot tell you how many times I’ve watched Ylvis’s hilarious, mesmerizing, unforgettable ‘The Fox,’” said Jon Anderson. “The lyrics and playfulness of the song lend themselves perfectly to the picture book format, and I’m ecstatic that Simon & Schuster is publishing Bård and Vegard’s first book. Parents and kids are going to have an absolute blast reading What Does the Fox Say? out loud.”

BÅRD and VEGARD YLVISÅKER are brothers. They are a musically gifted duo who work together as comedy hosts in Norway on a popular Norwegian talk show, I kveld med Ylvis. They received international fame when they uploaded the music video of their song, “The Fox,” on YouTube in September 2013. The fun music video has now reached more than 200,000,000 views, and has made its way as a dancing routine on ABC’s Dancing with the Stars and as a parody on NBC’s Saturday Night Live. The duo has appeared on The Ellen DeGeneres Show, Late Night with Jimmy Fallon, and live on the plaza with The Today Show.

“We are very excited about this book.” said Vegard Ylvisåker. “It is much more than just a spin-off from the video.  We actually started the process with the illustrator before we even uploaded the video to YouTube.  As we were working with the song it just felt like it had the potential of becoming an interesting book as well, mostly because all of a sudden we found ourselves wondering what does the fox really say?”