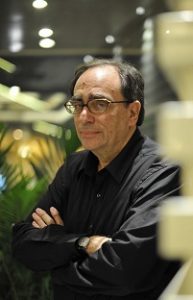 Stine will be posting prompts, jokes, photos, and videos to get fans in the Halloween spirit, and will answer fan-submitted questions. Longtime Goosebumps fans will delight in seeing some of Stine’s favorite old-school merchandise from the series. And, participants will also have a chance to win one of 10 signed Goosebumps books!

Goosebumps is one of the best-selling children’s series of all-time – with more than 350 million English language books in print, plus international editions in 32 languages. A global megabrand, the Goosebumps television series, produced by Scholastic Media, is streamed exclusively on Netflix in the US.  The show airs on The Hub and is available on iTunes, on DVD from Twentieth Century Fox Home Entertainment, on audio from Scholastic Audio and in multi-platform video games and apps from Scholastic Interactive.

Besides the Goosebumps and Goosebumps HorrorLand® series, Mr. Stine is the author of many other best-selling books and series including: Fear Street, Rotten School, Mostly Ghostly, The Nightmare Room, and Dangerous Girls. Mr. Stine lives in New York. For more information on R.L. Stine and Goosebumps, visit http://mediaroom.scholastic.com/Goosebumps.