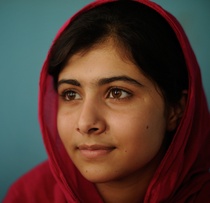 NEW YORK–Megan Tingley, Executive Vice President and Publisher, Little, Brown Books for Young Readers, announced today that Malala Yousafzai will share her remarkable story with young readers ages ten and up in a book titled ‘I Am Malala: How One Girl Stood Up for Education and Changed the World.’ Cowritten with two-time National Book Award Finalist Patricia McCormick, ‘I Am Malala’ will be simultaneously released in hardcover, ebook, and audiobook on August 5, 2014. The acquisition for world rights was made by Megan Tingley with Karolina Sutton at Curtis Brown and Amanda Urban at ICM. ‘I Am Malala’ will be edited by Farrin Jacobs, Editorial Director, and Elizabeth Bewley, Senior Editor, Little, Brown Books for Young Readers. The book will be published in the UK by Orion Children’s Books, an imprint of the Orion Publishing Group, a division of Hachette UK, and in France by Hachette Jeunesse, an imprint of Hachette Livre.

In October 2012, fifteen-year-old Malala Yousafzai was shot in the head at point-blank range because she had the temerity to campaign for girls’ education. She survived the brutal attack, and the shocking story made headlines around the world. Overnight, Malala became a global symbol of peaceful protest and education for all. In recognition of her courage and advocacy, Malala was nominated for the Nobel Peace Prize, the youngest person ever to be singled out in that way. The United Nations declared July 12, 2013—Malala’s 16th birthday—“Malala Day” in honor of her heroic stand to ensure universal education.

‘I Am Malala’ is the memoir of this remarkable teenage girl who risked her life for the right to go to school. Raised in a changing Pakistan by enlightened parents, Malala was encouraged to speak up for herself and taught to stand up for her beliefs. Written for her peers, ‘I Am Malala,’ tells the story of her bravery and determination in the face of extremism, detailing the daily challenges of growing up in a world transformed by terror.

“My story is the story of thousands of children from around the world. I hope it inspires others to stand up for their rights,” said Malala Yousafzai.

“We are enormously proud to be working with Malala to bring her inspiring story to young readers. I believe this book has the power to change lives, and we are committed to ensuring that it is read by as many young people as possible around the world,” commented Megan Tingley.

Patricia McCormick, who has dedicated her career to telling stories of social injustice and acts of bravery by young people, remarked, “Malala is a hero to millions of people, and I’m honored to help her tell her story. This book will give young readers a chance to get to know her as a person.”

‘I Am Malala: The Girl Who Stood Up for Education and Was Shot by the Taliban’ by Malala Yousafzai with Christina Lamb, a book for adult readers, will be published by Little, Brown and Company on October 8, 2013.

Malala Yousafzai, the educational campaigner from Swat Valley, Pakistan, came to public attention by writing for BBC Urdu about life under the Taliban. Using the pen name Gul Makai, she often spoke about her family’s fight for girls’ education in her community. In October 2012, Malala was targeted by the Taliban and shot in the head as she was returning from school on a bus. She miraculously survived and continues her campaign for education.

In recognition of her courage and advocacy, Malala was honored with the National Youth Peace Prize in Pakistan in 2011 and won both the International Children’s Peace Prize and the Amnesty International Ambassador of Conscience Award in 2013. She is the youngest person ever nominated for a Nobel Peace Prize. She was short-listed for Time magazine’s Person of the Year and has received numerous other awards.

Malala continues to champion universal access to education through the Malala Fund, a nonprofit organization investing in community-led programs and supporting education advocates around the world. For more information, go to malalafund.org.

Patricia McCormick is a two-time National Book Award Finalist and the author of several critically acclaimed books for young adults, including Sold, an account of human trafficking based on her research in the brothels of Calcutta, and Never Fall Down, the story of a boy who survived the Killing Fields of Cambodia by playing music. McCormick was named a New York Foundation for the Arts fellow in 2004 and a MacDowell Fellow in 2009. She is also the winner of the 2009 German Peace Prize for Youth Literature. She lives in New York with her husband. For more information, go to patriciamccormick.com.