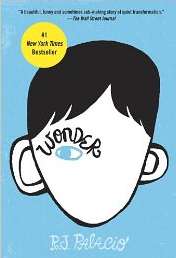 October 10, 2013 (New York, NY)—Eighteen months after its release, WONDER, the #1 New York Times bestselling middle-grade novel by R.J. Palacio—a book called “rich and memorable” (The New York Times Book Review), “the best kids’ book of the year” (Emily Bazelon for Slate.com), and a “debut novel so remarkable, and so lovely” (The Wall Street Journal)—has sold 1 million copies in hardcover and digital formats, it was announced today by Barbara Marcus, President and Publisher of Random House Children’s Books (RandomHouseKids.com). WONDER is published by Random House’s Alfred A. Knopf Books for Young Readers imprint in the U.S. and Canada. It released in the U.S. on February 14, 2012, and was edited by Executive Editor Erin Clarke.

“We are so pleased to celebrate this incredible million-copy milestone,” said Marcus. “We credit the sensation that is WONDER to a remarkable, unforgettable, inspiring story written by debut author R. J. Palacio, and the extraordinary enthusiasm of booksellers, educators, families, and readers everywhere.”

The story of a fifth grader born with a facial deformity who attends mainstream school for the first time, WONDER resonated instantly with readers of all ages and has remained at the top of bestseller lists, including 80 weeks on the New York Times bestseller list, with 36 weeks in the #1 spot. The book has garnered national review praise from such outlets as NPR and Entertainment Weekly, and sparked a national movement called Choose Kind on Tumblr that schools have embraced as part of their anti-bullying curriculums. Students, parents, teachers, and librarians are excitedly sharing copies and endorsing #thewonderofwonder on Twitter.

“Sales continue to be strong in every region of North America and in all channels of distribution,” said Joan DeMayo, Senior Vice President, Director of Sales. “It’s especially gratifying that new readers are discovering WONDER every day and sales show no sign of slowing down. This book was an instant classic in the children’s marketplace, but also has a broader appeal to adult readers, which helps account for its enormous success.”

“It’s so heartening to me to know that this little book about a boy who is ‘different’ has found such a wide audience,” said Palacio. “The main character, Auggie Pullman, has become a hero to so many readers—children and adults alike. Maybe it points to the fact that feeling ‘different’ really is a universal experience, and it’s that very feeling that ultimately unites all of us.”

Palacio receives numerous daily event requests from schools, stores, and organizations and has traveled across the country as guest of honor at a multitude of All-City Reads events, including Santa Monica, California; Fairfield, Connecticut; Tacoma, Washington; and Naperville, Illinois. She is involved with organizations such as the Children’s Craniofacial Association, and will give the keynote address at the American Cleft Palate Craniofacial Association’s Annual Conference in March.

“I’m so thankful to the teachers and librarians who put this book on the map, the wonderful folks in the craniofacial community who have supported the book, and most especially the kids who, inspired by the message of the book, have pledged to ‘Choose Kind’ all across the country,” said Palacio.

R. J. Palacio was a graphic designer by day, creating book jackets for others, while writing WONDER, her first novel, by night. She was previously Director of Children’s Books at Workman Publishing and will soon assume the position of Editor-at-Large, devoting more time to speaking engagements for WONDER and to writing her next novel. She is also now a headlining member of the illustrious roster of authors represented by the Random House Speakers Bureau (RHSpeakers.com). She lives in New York City with her husband, two sons, and two dogs.