Do the Greatest Fictional Villains Come From Kid Lit? 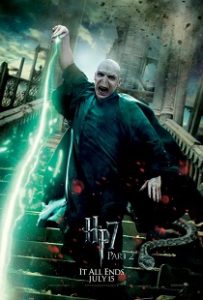 Mockingbird Author Kathryn Erskine named Lord Voldemort from the Harry Potter series citing that “what makes him so creepy is that he and Harry are connected. The idea that we all have some evil in us, or the potential for evil, is a little scary.” Famed Illustrator Oliver Jeffers calls The Grand High Witch (Roald Dahl’s The Witches) “perfectly terrifying.” Journalist Denise Kiernan feels that Bugs Meany (Donald J. Sobol’s Encyclopedia Brown series) encompasses “the be-all, end-all of kid bullydom”. Which villain has wormed its way into your nightmares?