CBC Diversity: It Doesn’t Have to Be True to Be Truthful 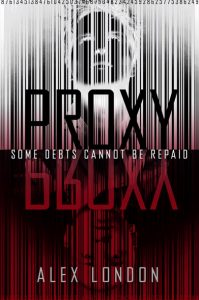 Authenticity, that vicious guard-dog of truth, bedevils a teller of stories every step of the way. It is not enough to feel the truth of what you write or even to know it. The reader must feel you are right in the telling of it. An inauthentic voice can make even an honest memoir feel like a lie, while an authentic voice can make a whole pack of lies seem true. Just look to James Frey’s first book for proof of that.

In writing my YA debut, Proxy, I struggled with authenticity early on. As a gay man who was once a gay teen, I had no trouble with my protagonist’s sexuality. I well-remembered the unrequited longings, the suppressed desire for a kiss that sometimes broke out as rage, and the feeling, ever-present, that my sexuality did not define me and that I could not let the world tell me it did.

Syd, one of two main characters in Proxy, contains much of the truth of my own experience and the challenge there was the common challenge to all writing: to make sure I rendered him as vividly as I would want to be rendered myself. I had memories to draw on, fragmented conversations with my straight best-friend, felt truths that I could, with effort, put into words.

The tricky parts were those other pieces of the puzzle that inform the identity of my protagonist, Syd. He is poor, orphaned, dark-skinned. I am none of those things. I share much more in common with the privileged pretty-boy of the story, Knox, who, other than being (quite) heterosexual, resembles young me far more than I’m comfortable admitting. I wrote his privilege to explore, question, reconcile, and problematize my own.

But Syd…we share so little in common. Just because we might have the same romantic inclinations, I couldn’t presume his way of being in the world was anything like mine. To do so would have done the character, and the countless young people in our world whose lives do, to an extent, resemble his, a great disservice. Though set in a dystopian future, I drew much of the world of Proxy from my experiences as a journalist in refugee camps and urban slums around the world, where poverty, power, and competition crash into the free market and send earthquakes through the lives of millions of our world’s young. Syd shares more with those real-life children than with any ghosts of my own teenage years.

So how to write him authentically? At first, I imagined myself a reporter, working once more with the young people I’d met and written about, the child soldiers in the Eastern Congo, the migrants along the Thai-Burma border, the isolated Roma of Kosovo and Bosnia. I began writing Syd for them, with as much empathy and imagination as I could. I quickly realized I could not write this character as a stand-in for any assumptions I had about any group. He’d be a hollow cut out of a person. While those years of research helped me capture the feeling of the slum I invented for Syd to live in, I had to make the character himself whole, with contradictions and complexities born of his circumstances but also born of his unique humanity. He would be ‘authentic’ if I could make him live.

I found my way to Syd’s voice and to all the voices within Proxy the same way any character is conjured from the ether. I tried to imagine him fully. He was not me, nor a stand in for anyone else. He was himself.

It was in writing Syd that I truly came to understand a secret to writing authentically is not to have lived the life your character inhabits—which is impossible in science fiction, and ridiculously limiting in all creative story telling—nor can it simply be produced by years of research—although research sure does help. Authenticity may be the guard-dog of truth, but it can be tamed by a simple technique that’s as challenging and necessary in fiction as in real life: empathy. Authenticity is the end result of writer putting in the work of empathy.

Alex London, the author of Proxy, writes books for adults, children and teens. At one time a journalist who traveled the world reporting from conflict zones and refugee camps, he now is a full time novelist living in Brooklyn. You can visit Alex London at www.calexanderlondon.com