CBC Diversity: Write What You Know 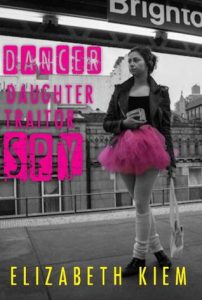 Last month, as the release date of my Cold War thriller Dancer, Daughter, Traitor, Spy drew near, these were the things I worried about:

Would Russian readers question why I nicknamed Marina, my heroine, ‘Marya’ rather than the more usual ‘Marinka?’

Would American readers check Google earth and find that the building where Marya lives is not as close to the riverbank as I implied?

Would anybody notice that Marya flies out of Moscow on a Tupelov 134, which is actually an unmanned drone?

In other words I worried that readers might question the authenticity of my story, my setting, or my props. But it never occurred to me that I might be challenged on the authenticity of my character – a Russian ballerina with a psychic streak and a lot of family baggage.
I have been preoccupied with Russia since I was a pre-teen. I wrote my first paper on ‘Détente and Perestroika.’ In college I studied Russian Imperial History and the Great October Revolution. A month after the Soviet Union collapsed I moved to post-Moscow where I lived for four years and watched as monuments toppled and lifestyles crumble.
But as I experienced Moscow in real-time, I remained fascinated with the not-so-distant past … and with the youth of my new friends. Every trip to the dacha was a voyage in time; every visit to an antique shop, a glimpse into another generation. When Olga bent my ear about her love life, it was a cultural epiphany. When Stas and I split a bottle of lemon vodka I internalized a new ideology.
Writing Marina was as easy as writing Olga and Vika and Dima and Stas – friends whose Soviet childhood became so familiar, I sometimes felt it was my own. I enveloped her in the nostalgia I had been leant and placed her on streets I knew. Her embrace of these comforts is what made her real to me.
When, in the course of my story, I moved Marina to Brooklyn, I had to invite another model. She had gone from being the personification of an era to a girl out of her element. For the remainder of the book I allowed her to be the character I had initially created, but informed by experiences that were my own. (No – I have never been a fugitive and I am not more extra-sensorily perceptive than most – but I know very well the discomfort of feeling ignorant in a new land; and I also know how dance can remove almost any discomfort.)
So, there you have it – I’m a dancer and a Russophile. I have lived in Moscow, I have Russian friends, I love Russian movies, and I have real-life experience and passionate research in my arsenal. I’m also a Brooklynite, so I know Brighton Beach like the back of my hand.
Is that all I need tell the story of a Soviet teen defector?
It is if she is me … in another life.

Elizabeth Kiem studied Russian language and literature at Columbia University and writes novels, essays, reports, reviews, grocery lists and more. She has lived in Brooklyn for more than 15 years, and before that she lived in Moscow as it entered a new era, immediately after the collapse of the Soviet Union. Besides Brooklyn and Moscow, her favorite places are Alaska (where she was born), Istanbul (where she understood that all great cities straddle the water), and Haiti (where life itself straddles the water). In Russian, she is Elizaveta Ivanovna. Dancer Daughter Traitor Spy is her first novel.