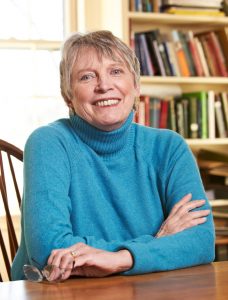 BROOKLYN, NY, August 20, 2013: Today, Brooklyn Borough President Marty Markowitz, the Brooklyn Literary Council and Brooklyn Tourism announced that the eighth annual Brooklyn Book Festival, which takes place on September 22nd, 2013, will bestow its Best of Brooklyn, BoBi award on Newbery Award Medalist, Lois Lowry. The BoBi is presented to an author whose has had a significant impact on the field of literature and whose body of works exemplifies and speaks to the spirit of Brooklyn.

Lowry is also one of this year’s five collectible bookmark authors together with Nick Flynn, Sapphire, the late Harvey Shapiro and Adrian Tomine. “Bookmarks” are a yearly distinction given to literary figures whose heritage and work connect back to Brooklyn. The collectible bookmarks can be picked up beginning this week at all independent bookstores in Brooklyn, as well as every branch of the Brooklyn, Queens and New York Public Library systems.

“Read all about it – the greatest literary minds hail from Brooklyn, USA!” said Brooklyn Borough President Markowitz. “This year’s Bookmark honorees exemplify our local excellence in literature, poetry, comics and playwriting. They are an inspiration to aspiring authors and illustrators, young and old, who wish to put ink to paper and fingers to keyboards in the pursuit of artistic greatness. They are helping us write the next chapter in Brooklyn’s great story!”

“We are so proud to add Lois Lowry to the prestigious list of BoBi winners, which includes Edwidge Danticat, Pete Hamill, Jhumpa Lahiri, Walter Mosley, John Ashbery and Paul Auster,” said Johnny Temple, chair of the Brooklyn Literary Council. “Ms. Lowry is our first winner whose books are primarily geared toward young readers, and she combines so well with our other 2013 bookmark honorees Sapphire, Nick Flynn, the late great Harvey Shapiro, and Adrian Tomine to beautifully represent Brooklyn’s literary legacy.”

Lowry, two-time Newbery Medal winner, is one of the most important writer in children’s literature today. As the author of Number the Stars and the dystopian novel, The Giver, her work has influenced and inspired young readers throughout the country, where her books are widely read and discussed for taking on brave subject matter. She has written 41 books overall. Lowry lived in Brooklyn as a child and went to high school in the borough as well.

“My first memories of Brooklyn are the war years…searchlights in the sky, and air raid wardens on the streets…along with neighborhood playmates in Bay Ridge,” said Lowry. “That is all so long ago. It’s lovely to come back now to a grown-up Brooklyn, changed—as I have—and to be honored in this way.”

Nick Flynn is an innovative and influential poet and playwright who may be most famous for his memoir-turned-film, Another Bullshit Night in Suck City, which recounts the story of how he crossed paths with his absent father at a homeless shelter. Before he won any prestigious fellowships and watched Robert DeNiro play his on-screen father, he worked as a social worker and a ship’s captain. Flynn spends half the year in Brooklyn.

Sapphire is first and foremost a poet and performer. But she is also a novelist, the author of two unforgettable bestselling books, Push and its sequel, The Kid. Push is about an illiterate, brutalized Harlem teenager, and became the Academy Award-winning film Precious. Sapphire is the author of several poetry collections, including American Dreams. She joined the Slam Poetry movement in New York City, where she now lives.

Harvey Shapiro was a celebrated poet and editor of The New York Times Book Review. He served as editor for forty years of The New York Times Magazine, where he suggested that Martin Luther King Jr. pen a letter in jail—“Letter from a Birmingham Jail.” In World War II, Shapiro was a radio gunner with the Fifteenth Air Force, and the Armed Forces awarded him a Distinguished Flying Cross. He wrote his last poetry collection, The Sights Along the Harbor, in 2006. He lived in Brooklyn Heights.

New Yorker cartoonist Adrian Tomine began his career at age 16, self-publishing the mini-comic Optic Nerve, which he still serializes. His graphic novels Shortcomings, Summer Blonde, Scenes From An Impending Marriage and Sleepwalk and Other Stories have received critical and popular acclaim. He most recently celebrated his life in the city with New York Drawings, a compilation of his city-related drawings, sketches and magazine covers. He lives in Brooklyn.

“The Brooklyn Book Festival is an annual restoration of my faith in humanity,” said Tomine.

More details will be available as the event approaches, with programs and authors subject to change. Updated information about the Brooklyn Book Festival is available by visiting www.visitbrooklyn.org and calling (718) 802-3846.

A full week of “Bookend” literary-themed events also returns this year, with venues in clubs, parks, bookstores, theaters and libraries across the borough from September 16th until the 22nd, serving readers of all ages.

The 2013 Brooklyn Book Festival is presented by Brooklyn Tourism and the Brooklyn Literary Council, initiatives of Brooklyn Borough President Marty Markowitz, and is proudly supported by AT&T. Major partners include the NYC Department of Parks & Recreation and St. Francis College. Additional sponsors include: Astoria Federal Savings, Boar’s Head Brand, Citi, Con Edison, Downtown Brooklyn Partnership, and Target. The Festival is also supported with grants from The New York City Department of Cultural Affairs, NYC & Company Foundation, and the New York State Council on the Arts. The New York Marriott at the Brooklyn Bridge is the official hotel. Media partners include ABC and Time Out New York/Time Out New York Kids.