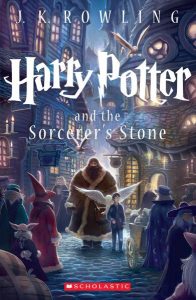 Calling All Librarians: How Would You Throw a Party to Celebrate the 15th Anniversary of Harry Potter and the Sorcerer’s Stone?

New York, NY – June 10, 2013 – In celebration of the 15th Anniversary of the U.S. publication of Harry Potter and the Sorcerer’s Stone, Scholastic is inviting public libraries all across the country to enter to win a fabulous Harry Potter party pack for young readers in their communities.   To enter, librarians should describe in 500 words or less the ultimate Harry Potter celebration they would throw to welcome a new generation of readers to the world of Harry Potter.  Fifteen winning public libraries will be announced on Harry Potter’s birthday, July 31st, 2013.   Celebrations will be held on August 27, 2013 – the date when new U.S. trade paperback editions of all seven Harry Potter books, with spectacular new covers illustrated by #1 New York Times bestselling author/artist Kazu Kibuishi, will arrive in communities nationwide.

“Throughout the past fifteen years, librarians have introduced millions of children to Harry Potter, and helped young readers discover the joy of reading,” said Ellie Berger, President of Scholastic Trade Publishing. “Today we celebrate librarians, the magic of Harry Potter and all the future readers who are getting ready to start their journey to Hogwarts.”

Librarians can enter here. Deadline to enter is July 17, 2013. (NO PURCHASE NECESSARY). Open to legal residents of the 50 United States and the District of Columbia who are public librarians and ages 18 and over entering on behalf of their public library.  Entrants must have permission from their public library to enter this contest.  Only one entry per public library. Void where prohibited. Complete rules can be found here. To learn more about Harry Potter and to view or download the new cover art by Kazu Kibuishi, visithttp://mediaroom.scholastic.com/harrypotter.

Fifteen years after the first U.S. publication of J.K. Rowling’s first book, Harry Potter and the Sorcerer’s Stone in September 1998, there are more than 150 million Harry Potter books in print in the United States alone and the series still hits bestseller lists regularly. The seven Harry Potter books are published in over 200 territories in 74 languages and have sold more than 450 million copies worldwide.