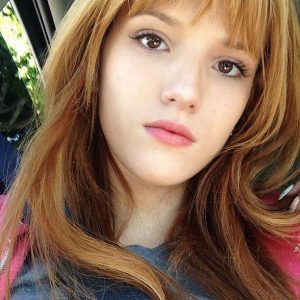 AUTUMN FALLS is the story of a 14-year-old girl whose high school life unexpectedly changes after an encounter with magic.

Delacorte Press will publish the first novel in the multiple book series in hardcover in the summer of  2014.  AUTUMN FALLS is Thorne’s publishing debut, and she will co-write with Elise Allen. A multitalented teen star, Bella is best known for her lead role playing aspiring dancer “Cece Jones” on the hit Disney Channel original series Shake It Up, which is in its third season.

“I am very excited to be working with Random House and am so happy that AUTUMN FALLS will have a home there,” says Thorne. “This book, although mysterious and magical, is inspired by different aspects of my personal life, which I hold very near and dear to my heart. I wanted to write a book that teens could relate to, but with a little bit of magic. I am thrilled and hopeful that my audience will grow with me throughout the series.”

“We are so pleased that Bella will make her publishing debut with Random House Children’s Books,” says Horowitz. “Her authentic and passionate voice will captivate girl readers, who we know will relate to Bella and her characters.”

“Bella’s got fantastic energy and is a true original—her fans are going to love seeing her creative and cool vision come to life in AUTUMN FALLS,” says Loggia.

Loggia negotiated the book deal for Delacorte Press with Matthew Elblonk of DeFiore & Company representing Bella Thorne. Terms of the deal were not disclosed.

BELLA THORNE is the star of the hit Disney Channel original series Shake It Up and the Disney Channel Original Movie Frenemies. In addition to her starring roles with the Disney Channel, Thorne has had roles on other hit series such as HBO’s drama Big Love, NBC’s My Own Worst Enemy, Billy Baldwin’s Dirty, Sexy Money, and Cheryl Hines’s daughter on In the Motherhood. She followed up on her acting successes with her first solo single TTYLXOX which was included on the Shake It Up soundtrack selling over 400,000 singles to date and making it onto the Billboard 100 charts. Recently, Thorne was signed to Hollywood Records.

Thorne was recently the spokesperson for the Staples and the DoSomething.org campaign for last years’ back-to-school season and she shared her story on how she overcame dyslexia in Disney Channel’s The Time I… (Dyslexia), which was nominated for a 2012 Daytime Emmy Award for Outstanding Special Class Short Format Daytime Program. This year she was nominated for “Favorite TV Actress” for the ALMA Awards, and was also nominated and won “Best Young Actress/Television” at the IMAGEN Awards. She is currently nominated for a Radio Disney Music Award. Thorne is a Global Ambassador for StompOutBullying.org and works closely with the Dyslexia Foundation.