Scholastic Launches “The Adventures of Captain Underpants™” App for iPad, Based on Bestselling Book Series by Dav Pilkey 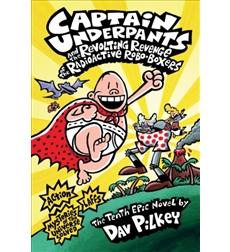 New York, NY (January 17, 2013) — Scholastic, the global children’s publishing, education, and media company, announced today the U.S. launch of “The Adventures of Captain Underpants” App for iPad, available exclusively on the App Store. Also this week, Scholastic published Dav Pilkey’s tenth epic Captain Underpants adventure, Captain Underpants and the Revolting Revenge of the Radioactive Robo-Boxers, with a first printing of one million copies. The Captain Underpants App boldly brings the Captain and his adventures to young fans who will love to read, play and interact with their favorite characters in color!

“For more than fifteen years, kids around the world have devoured Dav Pilkey’s brilliant combination of humorous stories, fantastic characters, and irresistible illustrations,” said Ellie Berger, President of Scholastic Trade. “Now, longtime fans, as well as those just discovering the captivating world of Captain Underpants, can experience Dav Pilkey’s irreverent humor in this all-new interactive format. This app is a fun and exciting way to extend the reading experience for this phenomenally popular series.”

“The Scholastic app team did an awesome job!” said Dav Pilkey. “I really think kids are going to have a lot of fun reading the book in full color, playing the crazy games, interacting with the characters—and creating new ones of their own!”

In The Adventures of Captain Underpants App, old and new fans of the Captain will discover new ways to interact with their favorite characters, with all the action, thrills and “laffs” they’ve come to know and love in the Captain Underpants books. Players can dive into the world of the Captain in the Book-O-Rama, which presents the entire first epic novel The Adventures of Captain Underpants by Dav Pilkey for the first time in color and in high resolution. Experience the book as never before with full narration and literally move through the story with parallax animation technology. Play zany, fun and interactive games: help Harold and George hypnotize their teacher Mr. Krupp! Race against the clock to chase Captain Underpants through the city in a challenging maze game! Battle with Dr. Diaper and his nefarious robot minions to destroy the Laser Matic 2000 and save the world—before it’s too late! As players earn rewards in the games, they can visit the Beatbox and play hilarious sounds, record their own sounds and then watch the Captain “conduct” a gut-busting symphony. Players also can create their own avatar and choose a silly “Captain Underpants name,” literally putting them in the app where they’ll see their avatars right alongside Captain Underpants.

The Adventures of Captain Underpants App is available for $4.99 from the App Store on iPad or at www.itunes.com/appstore.

Dav Pilkey created his first stories as comic books while he was in elementary school. Since then, in addition to the Captain Underpants series, his Scholastic books include numerous popular, award-winning books for children, such as Dog Breath,winner of the California Young Reader Medal; The Paperboy, a Caldecott Honor Book; The Adventures of Super Diaper Baby,which debuted at #1 on the New York Times bestseller list; The Adventures of Ook & Gluk: Kung-Fu Cavemen from the Future, a #1 New York Times bestseller, and the Dumb Bunnies series. For more information about Dav Pilkey, visit www.pilkey.com.

Scholastic Corporation (NASDAQ: SCHL) is the world’s largest publisher and distributor of children’s books and a leader in educational technology and related services and children’s media. Scholastic creates quality books and ebooks, print and technology-based learning materials and programs, magazines, multi-media and other products that help children learn both at school and at home. The Company distributes its products and services worldwide through a variety of channels, including school-based book clubs and book fairs, retail stores, schools, libraries, on-air, and online at www.scholastic.com.